The story of Indian migration to Japan dates back as early as the late 1800s. From what was just a handful of families spread out in distant cities, has now grown to thousands of immigrant Indian families who call Japan home. Powering this meteoric rise was the number of IT professionals who began moving here in the 1990s. A professional, highly educated segment of the Indian Diaspora, these immigrants desperately needed a school that catered to their expectations. Thus, India International School in Japan was born.

Under the guidance of founder Nirmal Jain, the school started with an initial enrollment of 27 in 2004 in a small office building. As the years went by, the enrollment increased as did the size of the office buildings. IISJ Tokyo moved into its current premises – a full fledged school building with playground, gym, library, and science and computer labs – in 2007. Enrollment was about 800 students. Seeing the success of the Tokyo school, Yokohama city officials requested IISJ to open a second campus in Yokohama. Six years since its launch, IISJ Yokohama boasts 200 students from kindergarten to Grade 12 with enrollment growing every year.

A major milestone was reached in 2010 when IISJ received accreditation from the Central Board of Secondary Education in India. It followed that up with an accreditation to offer International Baccalaureate classes in 2015. But the most important validation came in 2016 when IISJ was granted “gakko hojin” status by the Japanese government after a stringent application process. As a “gakko hojin,” or educational corporation, IISJ can now offer tuition subsidies, financial aid, and even discounted transportation passes. 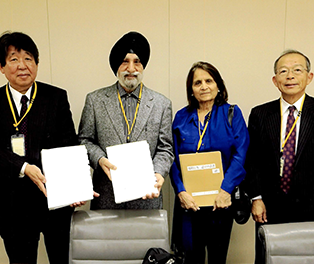 IISJ was created to fill a strong need. It has been a solid rock for the Indian Diaspora that has sought to put roots down in Japan. Much like the Diaspora it serves, IISJ’s next step is to also put down its own roots: our goal is the construction of our very own school building, a permanent home.

We will shortly come up with something new, keep visiting us.

Build a Bright Future at IISJ

All Rights Reserved © 2021
Powered by